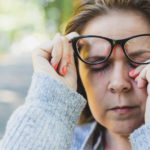 A 65-year-old woman who was Italy’s first confirmed COVID-19 patient had detectable levels of infectious viral particles in her eyes, long after the infection had cleared from her nose, according to a new report on her case, which was recently reported on by Christopher Carbone on Fox News.

On Jan. 23, she took a flight flew from Wuhan, China, where the outbreak originated, to Italy.

Less than one week later, she began experiencing symptoms of COVID-19 and was admitted to the hospital the next day. She had a dry cough, sore throat, inflammation of the mucous membrane in the nose and pink eye. The woman tested positive for the new coronavirus, SARS-CoV-2, and a few days later, she later also developed a fever, nausea and vomiting.

Health-care professionals took an eye swab and discovered she had genetic material from the coronavirus in her eyes.

“SARS-CoV-2 RNA was detected in ocular swabs days after it was undetectable in nasal swabs,” the researcher wrote in their report, published in the April 17 journal Annals of Internal Medicine.

COVID-19: What to Tell Patients About Contact-Lens Wear

“We found that ocular fluids from SARS-CoV-2-infected patients may contain infectious virus, and hence may be a potential source of infection,” the authors wrote. “These findings highlight the importance of control measures, such as avoiding touching the nose, mouth, and eyes and frequent hand washing.”

Researchers suspect that the eyes could both be an entrance to the virus and a source of spread. They caution that eyecare professionals must be particularly careful during examinations.