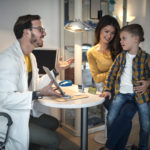 Let’s start this discussion with the definition of independent. Merriam-Webster defines independent as: “not subject to control by others: SELF-GOVERNING; not affiliated with a larger controlling unit.”i

Since both parts of the definition hinge on the word control, the question becomes: is there any area of the practice that you no longer control? We had an issue come to our attention last week in which a PE group had purchased an independent private practice and was now dictating which spectacle lens-making laboratory the practice must use. The doctors and optical staff wanted to use a specific lab for a branded specialty lens, but were prevented by the PE group from doing so. That is clearly a loss of control. That is clearly a loss of independence. (By the way, the result was that there were many unnecessary patient remakes that occurred from using the PE-chosen lab.)

Another independent private practice sold to a different PE group and had a different situation occur. The doctor in the practice who was the previous owner, but now is functioning as an employee of the PE group, told his staff to book him out of the office on Friday afternoon so he could attend his son’s soccer game. He went into the exam room to see his next patient. Meanwhile, staff contacted the PE group management to inform them of the change. When the doctor came out of his exam room staff had to tell him that his request to take off Friday afternoon was not approved by the new owners of the practice. Because he is no longer the owner of the practice he must abide by the rules of the new owners.

Let’s consider the second part of Merriam-Webster’s definition of independence: “not affiliated with a larger controlling unit.” The analogy that comes to mind is indie films. Indie films are “… a feature film or short film that is produced outside the major film studio system …”ii If we use this as our reference, then, an independent private practice is outside the major companies owning practices.

So, are Vision Source practices or PE-owned practices still independent private practices since they are major companies controlling practices? What about practices owned by the PE-like subdivisions of EssilorLuxottica or VSP?

The Medium Extending Our Reach & Messaging to Patients

At the end of the day, what does it matter? Your goal should always be to provide the highest possible care to the patients you see. Perhaps the real question is: has the care you deliver decreased or increased since the change in the practice? That is the most important question that needs to be answered.