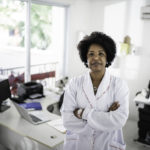 Women are continuing to make headway in optometry, new findings from Women in Optometry (WO) show.

The 2021 Women In Optometry (WO) data collected in late January 2021 shows that women comprise 45.1 percent of the ODs practicing in the U.S., Puerto Rico and Guam, an increase from the 44.2 percent found in January 2020.

The percentage of women ODs increased in 38 states; states with smaller populations saw some of the most dramatic increases: Vermont with a 4.9 percent jump, Montana at 4.2 percent and Wyoming at 3.9 percent.

Women now represent more than 50 percent of the ODs in seven states, plus Puerto Rico and Washington, D.C. In 2020, women tipped the scales in five states plus Washington, D.C.

WO has been tracking the numbers since 2012 at the start of each year using healthgrades.com information for those ODs who provide their gender. While numbers vary by reporting agency and licensing board, and while there is likely some overlap from ODs who work in more than one state, the WO numbers are derived through a consistent methodology.