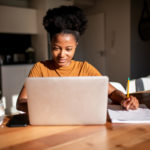 Warby Parker has filed for a direct listing on the New York Stock Exchange, a public offering whereby a company lists existing shares on the market, rather than raising money by issuing new stock, according to reporting by Lauren Hirsch in The New York Times.

The filing provided the first glimpse at Warby Parker’s finances. As with most digitally native brands, it is both growing quickly and losing money, Hirsch explained in the Times report. It reported revenue of $270 million in the first half of this year, up more than 50 percent from the same period last year, which was impacted by store closures during the pandemic. Its first-half loss narrowed to around $7 million, from $10 million last year.

Warby now generates about half of its sales online and half in its 145 stores, the company said, and it has plans to open more across the country.

Poll: Is Your Vaccination Status Any of Your Patients’ Business?

What Your Glasses-Only Patients Are Waiting to Hear From You

As it expands, Warby Parker said that people spending more time with screens would be good for business. “The rising usage of smartphones, tablets, computers and other devices has contributed significantly to increased vision correction needs and consistent new customer growth within the eyewear market,” the company said in the filing.