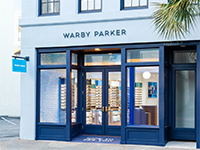 In a two-hour webcast presentation, Warby Parker Inc. co-founders and top executives laid out their plans for strong growth, including expansion of the physical store base, their ongoing philanthropic efforts and the company’s planned evolution to a more “holistic” vision care company that drives a larger share of revenue from eye exams and contact lens sales, according to reporting by Vision Monday.

The investor presentation follows last month’s registration filing with the Securities and Exchange Commission for a direct listing of Warby Parker’s Class A.

The executives, led by co-founders and co-CEOs Neil Blumenthal and Dave Gilboa, walked prospective investors through a range of performance metrics and company tactics that are designed to help it increase its estimated 1 percent to 2 percent share of the U.S. eyeglasses market. The executives noted that a third-party study estimated that Warby Parker could open up to 900 stores in the U.S. market as it continues to expand from 53 markets in the U.S. to more than 100 markets.

In its direct stock offering later this month (which means existing shareholders are selling their shares, and the company will not raise any money via the offering), about 77 million shares are expected to be part of the offering. The firm’s amended Form S-1 registration, filed late last week with the Securities and Exchange Commission, indicated that the company expects to begin trading on the NYSE on or about Sept. 29.

The amended filing also noted that during the first half of this year about 2.0 million shares were sold in private transactions at a price of $24.53. If the company listed its shares at that price, Warby Parker would command a fully diluted market value of $2.9 billion, according to a news report about the offering.

VMAIL reported on the initial SEC filing. That filing showed the company reporting 2020 sales of $393.7 million and a net loss of $55.9 million.

The company had 142 U.S. stores as of the end of its second quarter in June (and three in Canada), and it estimated there are about 41,000 optical outlets currently operating across the U.S. Warby Parker expects to open up to 35 new stores this year, the executives said.

Warby Parker’s filing noted that it will become “a public benefit corporation,” which means that it is “focused on positively impacting all stakeholders” as opposed to merely shareholders. And the company has various charitable intentions through a foundation and donation model of giving away eyewear when customers purchase their own set.

“This is a bigger stage for Warby Parker, and the larger the stage, the more people we impact,” co-CEO Blumenthal said in the webcast, responding in a prerecorded Q&A session with the company’s investor relations director. “That’s what motivates us every single day.”

“What’s exciting is that as the business gets bigger, we continue to uncover bigger opportunities for us to have an impact and those opportunities span every aspect of our business, from scaling our customer base to the products and services we offer,” Gilboa added. He noted, too, that he believes Warby Parker has more opportunity in improving the ways it engages with customers, “opening lots more retail stores, investing in pioneering technology,” such as telemedicine or virtual try-on, and by improving its buy-a-pair, give-a-pair program. “It’s really those opportunities that continue to motivate us and continue to ensure that we have as much excitement today as we did when we started this business over 11 years ago,” he said.