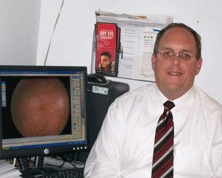 Glaucoma is one of four leading causes of blindness in adult Americans, affecting over 2.2 million people, according to the World Health Organization. Roughly 3 percent of my patients are monitored for glaucoma or are a glaucoma suspect.  Each of these patients generates on average $650 in yearly medical exam fees. Currently I am following 100 glaucoma/suspect patients, which multiplied by $650, equals $65,000 for my practice. Three percent of of my patients generates 14 percent of total exam revenue, making glaucoma a very profitable part of my practice.

It is estimated that over 2.2 million Americans have glaucoma but only half of those know they have it.

In the US more than 120,000 are blind from glaucoma, accounting for 9 to 12 percent of all cases of blindness.

Glaucoma is the second leading cause of blindness in the world, according to the World Health Organization.

After cataracts, glaucoma is the leading cause of blindness among African-Americans.

Blindness from glaucoma is 6 to 8 times more common in African-Americans than Caucasians.

African-Americans are 15 times more likely to be visually impaired from glaucoma than Caucasians.

The most common form, open-angle glaucoma, accounts for 19 percent of all blindness among African-Americans compared to 6 percent in Caucasians.

Other high-risk groups include: people over 60, family members of those already diagnosed, diabetics, and people who are severely nearsighted.

Estimates put the total number of suspected cases of glaucoma at over 60 million worldwide.

As part of my healthy eye examination, I perform an Optic Nerve OCT which allows an excellent indication of the health of the RNFL. According to Wisconsin Physicians Services, 50 percent of glaucoma patients are undiagnosed. Since including this test, I have found numerous glaucoma suspects and feel confident that my patients will have their glaucoma detected much earlier than if I wait for VF defects, elevated IOP or optic nerve changes. Diagnosing and treating glaucoma is becoming easier with the addition of new technology like the OCT which is quickly becoming a required instrument for monitoring glaucoma patients because it allows us to discriminate among patients with normal intraocular pressures who have glaucoma, patients with elevated intraocular pressure who have glaucoma and patients with elevated intraocular pressure who do not have glaucoma. Editors note: Coding glaucoma is a two step process.  Step 1 is identifying the type of glaucoma.  Step 2 is identifying the stage of the glaucoma.  It is not enough anymore to just identify the type of glaucoma.

The effective management of patients with pre-glaucoma and glaucoma involves careful evaluation of three modalities and follow-up.
1. IOP. The first is the intraocular pressure which, although useful to follow patients, is by itself not sufficient. There are patients who have ocular hypertension (high pressures without damage to the optic nerve), as well as patients with normal tension glaucoma (low pressures but extensive damage to the optic nerves).
2. Visual field testing. Visual field testing is highly beneficial for following progression of the disease. The problem with visual field testing is that until at least 50 percent of the over 1 million ganglion nerve fibers are damaged, there is no evidence of any field changes occurring. In patients with early glaucoma, it is very beneficial to make sure there are not any changes occurring, as well as to make sure there are no other neurological or vascular abnormalities on the visual field test.
3. Appearance of optic nerve and nerve fiber layers. Stereo disc photos of the optic nerve have been useful, but with improvement in technology, we have proven sensitive indicators that can demonstrate optic nerve and nerve fiber layer defect changes in a more sensitive manner in patients with glaucoma. In this regard, the scanning laser glaucoma test offers us a significant improvement in following patients for progressive damage to the optic nerve.

According to WPS policy for Optical Coherence Tomography (OCT), patients defined as glaucoma suspect must have at least one of the following symptoms documented in their medical record, either as currently presenting with or a history of:
a. Intraocular pressure > or = to 22 mm. of Hg.
b. Cup to disc ratio of > or = to 0.4 with family history of glaucoma or risk of low tension glaucoma
c. Documented increase of cup to disc ratio > or = to 0.2
d. Cup to disc ratio of > or = to 0.5
e. Focal notch with rim/disc > or = to 0.2
f.  Disc hemorrhage
g. Optic disc abnormality
h. Field defect (ICD-9-CM 368.40 – 368.45)
i. Asymmetry of cup to disc ratio with a difference of more than 2 mm.
j. Thin corneas, i.e. corneas with a pachymetry measurement equal to or less than 0.520
Interestingly, absent from this list is RNFL thickness as an indicator for glaucoma suspect but as the technology becomes more mainstream I am sure it will be added to this list.

Moderate Damage — AOA Definition
•    Optic Nerve – moderate concentric narrowing of the neuroretinal rim; increase in the area of central disc pallor; a complete localized notch or loss of the neuroretinal rim in one quadrant; undermining of vessels
•    Nerve fiber layer – minimal brightness to reflex; no texture; large, medium, and small retinal blood vessels clear
•    Visual field – partial or full arcuate scotoma in at least on hemifield; damage may involve both hemifields; fixation should not be involved; mean deviation between -6 dB and -12 dB

Glaucoma Coding Gray Areas and New Codes
If both of the patient’s eyes are glaucomatous, always report for the more severe stage of the two eyes. If the two eyes have different types of glaucoma, document each eye with its type and assign a stage code for each eye. The indeterminate code would be used when you see a patient that you haven’t yet had time to do a visual field on, the patient just can’t perform a visual field test, or it’s so unreliable or un-interpretable that you really are unsure what level or state they are at.

According to WPS, OCT is considered reasonable and necessary when performed on an annual basis for patients with a diagnosis of glaucoma or glaucoma suspect, and on six-month intervals for patients with low tension glaucoma. More frequent OCT may be approved when submitted with documentation describing the medical circumstance relating to the patient’s condition and explaining the need for more frequent services or extra visits.

The frequency of visual fields is dictated by the stage of disease or degree of risk factors. Claims submitted for visual field examinations performed at unusually frequent intervals may be reviewed to verify that the services were medically reasonable and necessary. Examinations found to have been performed at a frequency greater than is necessary for reasonable medical management of the patient’s condition are not covered. An Advance Beneficiary Notice (ABN) should be signed prior to the service if you feel Medicare will not pay due to frequency and you feel the test is necessary. Other insurance carriers allow one scanning laser per year for mild or suspect glaucoma, two per year for moderate glaucoma, and none for severe glaucoma. Most will allow up to four visual fields per year for severe glaucoma.

Another new code for glaucoma is in the V19 series, the Family History of Other Conditions. The new code is V19.11, used for a family history of glaucoma. This code is never used alone. The actual condition is listed first, such as glaucoma suspect.

Diagnosing and monitoring glaucoma suspects and glaucoma patients involves multiple office visits and supplementary tests. A flow chart will help you organize all the supplementary tests and their results so you may easily chart the patient’s progress.  I typically perform the following tests at the indicated intervals on both suspects and glaucoma patients:

12 months (6 months for Ocular Hypertension/moderate glaucoma/low tension):
Ant. Seg OCT (92132) and Optic Nerve OCT (92133)
1X: Pachymetry (76514)
12 months: Gonioscopy (92020)
1X: Serial Tonometry (92100) Reminder: Serial tonometry includes three or more IOP measurements on the same day at intervals of two to three hours.
OCT and fundus photos are mutually exclusive procedures that may not be reimbursed if performed on the same day. So have the patient return another day to perform one of the tests.  However, it is acceptable to perform all or some of the other supplementary tests on the same day.

Eric Botts, OD, is the founder and president of OBC Billing Specialists. To contact him: drvision@claimdoctor.net.