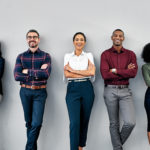 When my father graduated New England College of Optometry in 1954, the vast majority of students enrolled and in practice were white men. When I graduated NECO in 1984, it was still a majority of white males, plus a few women. Now, in 2020, the NECO student body is made up of nearly 80 percent women, including a large percentage who identify as being of Asian descent.

Demographics have changed and we should be proud of that. But it’s clear we still have work to do to develop optometrists who represent the U.S. population and the communities we serve. People identifying as Black make up about 13 percent of the U.S. population, but are only 3 percent of optometry school graduates.

We’re not alone. The medical community overall is struggling with a lack of diversity among physicians, which research suggests is linked to health disparities among racial and ethnic minorities. We cannot provide the best eyecare for all without the knowledge, experiences, perspectives and contributions of a diverse field of faculty, students, practitioners and researchers.

This moment is both a challenge and an opportunity. Where can we have the greatest impact to bring about so much needed change? I think our focus should be on three goals:

Promote Diversity & Inclusion in Academia
Our problem has not and will not fix itself organically. As always, schools and students are where the future begins.

Optometric education is positioned to diversify the student population (and faculty) and ultimately increase the number of Black optometrists. This begins by introducing more students of color to optometry, putting graduate school within reach and creating a more inclusive campus environment.

Secret to Thriving During a Pandemic: The Extra Help That’s Making a Huge Difference

How to Maximize Daily Disposable Multifocal CL Profitability in Your Practice

We also need to do a better job of introducing more middle- and high-school students to optometry, and creating pathways to get there. We can change recruitment strategies, establish scholarship funds and offer mentoring programs.

I believe that optometry is the best-kept secret in medicine. And the benefits of a rewarding, stimulating career need to be available to those who may not have considered or had the opportunity to pursue it.

Join Forces With Practitioners & Industry Partners
Right now, in this moment — as we face racism, and let’s be honest, widespread socioeconomic disparity – the power of unity and partnership have never felt more important. The eyecare profession has an opportunity to lead the way. We can bring about greater change together than as individual organizations. We should redouble our efforts to build strong partnerships, both to increase our influence and to hold ourselves accountable.

I had the privilege of witnessing the strength of collaboration about a year ago as 63 partners from 44 organizations gathered in Boston to discuss the evolution of our industry. What I took away from this Industry Collaborative was our commitment to collaborate, combine expertise and aggregate our resources to move the field of optometry into the future. I am excited and optimistic about what we can create, especially as it relates to increasing the number of Black optometrists.

Put in the Hard Work to Make Change Happen
NECO recently committed to the 13% Promise initiative by Black Eyecare Perspective— which asks for an equivalent amount of Black representation in eyecare companies, colleges of optometry (students, faculty and staff) and optometry boards. I encourage our colleagues in academia, practice and industry to learn more, sign on and get involved.

To live up to that promise and to expand diversity and inclusion in optometry, we recently named NECO’s first Diversity and Inclusion Liaison, Angela Abraham, OD. We have also committed to a formal plan that includes the use of collaborations and internal and external task forces with local and national diversity and inclusion leaders to guide us on best practices. We are ready and eager to learn from them.

We have begun to put in the hard work for better health-care experiences and outcomes for patients. For more rich, inclusive discussion at the board level. For a diverse and intellectually curious body of students to learn from faculty and researchers who represent the world we live in.

As far as we’ve all come since 1954, we still have that much again and more to go. I don’t claim we have all the answers. But I know in my heart that as a profession, the benefits we’ll gain in optometric education, research and practice—and in our society as a whole—are immeasurable.

Howard Purcell, OD, FAAO, President and CEO, New England College of Optometry (NECO), is a second-generation graduate of NECO. To contact him: purcellh@neco.edu