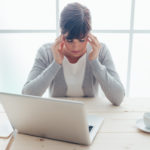 Your patients struggling with eye strain and migraine headaches have been searching long and hard for relief. I have found a spectacle lens with contoured prism that has made all the difference to these patients. The solution providing such great help is neurolens. Here are the details about neurolens and how it is transforming my patients’ lives.

The Power of Contoured Prism
Contoured prism is a neurolens proprietary technology in which the amount of base in prism increases (or base out decreases) gradually from the top to the bottom of the lens. This allows me to correct binocular misalignment at distance, intermediate and near in a single lens. Research shows over 90 percent of patients have a larger misalignment at near than distance. Contoured prism technology can be used in a single vision, traditional progressive or office progressive lens.

Satisfy a Growing Need & Build Profitability
In my small private practice, I have around 100 patients currently wearing neurolens glasses. Several have multiple pairs. They were all symptomatic before getting their neurolens glasses, but not all of them knew their symptoms were connected to their eyes before they came in to see me. Symptoms include headaches, neck pain/stiffness, discomfort with computer use, tired eyes, dry eyes, dizziness/lightheadedness and light sensitivity. The symptoms are assessed with a neurolens-provided “lifestyle questionnaire” on all new patients and comprehensive exams in our office.

The year started off really well for me with neurolenses. I had more than doubled my neurolens sales in the first quarter of 2020 compared to the first quarter of 2019. If that continued, which I was expecting, my average number of sales by the end of the year would be 12-14 a month. That growth has been temporarily interrupted by the COVID-19 shutdown. However, I think once we’re back up and running I will be able to get back on track fairly quickly.

I know I will have current neurolens patients who are due for their annual exam and will want a new pair. I have considered that patients may be more cautious with their spending after this crisis. Our practice offers patient financing, which helps the patient feel more comfortable with their purchase.

Transform Patients’ Lives By Providing Much-Needed Solution
One of my favorite neurolens success stories from inside my practice is a 61-year-old female with an acquired brain injury from a radioactive iodine treatment about five years earlier. She initially came to my office wearing dark blue tinted lenses because of severe light sensitivity. Other symptoms were headaches, intermittent blurred vision, difficulty using the computer, dizziness and severe dry eye syndrome.

I prescribed progressive photochromic neurolenses, but was concerned that she would not be happy with the light sensitivity since she was used to the dark blue tint. I figured I could have a custom clip made for her if she needed it. She picked up her lenses about two weeks later, on a Friday. She had an out-of-town wedding that weekend, so she wanted to wear her current lenses (the blue ones) for her trip, and planned to start wearing the neurolenses on Monday.

She left the office, but came back in two hours later saying she was wearing the new neurolenses around the house and already felt so much relief. She made the trip over just to tell us that! I had a follow-up visit with her a couple weeks later. All of her symptoms were reduced. She felt like her old self, before the brain injury. She did not need the blue tint. She also mentioned she used to use artificial tears every hour, and since wearing the neurolenses, she only puts them in once a day.

Create Satisfied Patients Who Generate Friends & Family Referrals
Another great success story neurolens made possible in my practice happened for a 29-year-old concussion patient. She was unable to do any near tasks following the concussion without getting double vision and severe headaches. I put her in neurolenses and she was able to do near work again. She was also able to do her vision and vestibular therapy more efficiently, which greatly affected her recovery success. She referred her mother-in-law, who suffers from chronic headaches. The mother-in-law ended up getting two pairs of neurolenses herself. The original patient’s (asymptomatic) husband started coming to the office as a patient, and more recently, his grandmother joined the practice.

Yet another neurolens success story in my practice is a 20-year-old college student who has had chronic headaches for the past eight years. He came to see me from over an hour away the week before he was supposed to go back to college last summer. He did well with the neurolens trial flippers in the office, so we ordered a pair and had them sent off to his college. He was a 0.50 D myope and only wore glasses occasionally for driving or seeing across the room in a big lecture hall.

A few weeks later, his mom called to make an appointment for herself. She told me her son was wearing the neurolenses all the time and hadn’t been getting headaches at school. She felt bad she never knew his symptoms were associated with his eyes. At her appointment, the mom said she also got headaches associated with near work and felt things were never clear at near, even with her over-the-counter readers. I showed her the neurolens flippers in the office and she cried in the chair, saying “this is how it’s supposed to look?!” She was seeing “normal” for the first time in her life. She ordered a pair and referred her neighbor.

The great thing about neurolens is it provides life-changing relief for patients while helping to grow my practice with so many friends and family referrals. It’s the gift that keeps giving to patients and practice alike.

Melissa Richard, OD, MS, is the owner of Spectrum Vision in Chalfont, Penn. To contact her: mrichard@spectrumvision.com