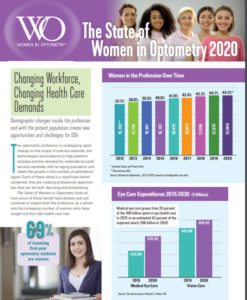 A new report, “The State of Women in Optometry 2020,” from Women in Optometry, has been released. The report, prepared for and presented at the Women’s Leadership Conference, highlights the profession’s changing workforce and the changing health-care demands facing ODs. This year’s Women’s Leadership Conference was held October 13-15 in conjunction with The American Academy of Optometry’s virtual Academy at Home.

The report also provides an analysis of the overall optometry marketplace, including the significant growth in the number of ODs compared to OMDs, whose numbers have experienced nearly flat growth since 2012. In addition, the opportunity to provide medical eyecare is noted, with the growth in the prevalence of eye conditions such as cataracts, glaucoma, age-related macular degeneration and diabetic retinopathy tracked.

New Survey Findings: How Many ECPs Have Had a Team Member Contract COVID?

>>Click HERE to download the report and learn more about the current status of women in optometry, and how that progress compares to past  years>>