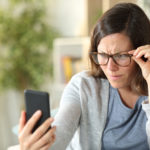 Addressing presbyopia when patients are in their late thirties and early forties can improve quality of life, and prove a tremendous practice and profitability builder.

There are many great progressive eyewear and contact lenses that make life easier at the onset of presbyopia. And, as luck would have it, the new presbyopia drops, VUITY, from Allergan, which were just approved by the FDA, will likely be good solution for young presbyopes, as the drops were trialed on patients that fall within that very age range.

Presbyopes generate around $170 in gross profit per comprehensive exam (not including follow-up appointments). That number, however, does not tell the full story. The key to remember is that one subgroup of early presbyopes, women 38-50, are often the primary healthcare decision-makers in their families. When you bring this subgroup of presbyopes into the practice, and they have a positive experience, the doors are frequently opened to a whole new family of patients.

It’s also important to note that the older the patient, the greater the risk for sight-threatening conditions. When you bring young presbyopes into the practice, you bring in patients who might not have been in an ECP provider’s office, giving you the chance to diagnosis and detect ocular and systemic disease earlier, thereby making better patient outcomes more likely. At the same time, this also gives you the opportunity to expand your medical eyecare base of patients.

Below is a graph that shows revenue from diagnosed disease states over six years, all of which we will have a greater opportunity to diagnose and treat by bringing young presbyopes into the practice.

Source: Chris Wolfe, OD. Note: Indirect revenue is defined as income generated from an office visit in which a patient comes to the OD seeking a prescription treatment, and in the process, is diagnosed with medical eyecare conditions requiring additional treatment in the OD’s office.

Changing Mindset on First Symptoms of Presbyopia
I treat patients for presbyopia at a younger age than in the past—not because presbyopia is occurring earlier, but rather because we’re learning to better identify the symptoms of early presbyopia, and we have new lenses to treat the problem, and we soon will be able to prescribe presbyopia eye drops  as part of our treatment plan. We’ve always equated presbyopia with blur at near, which is accurate, but some symptoms of presbyopia happen well before blur.

Fatigue is the most prevalent symptom. It’s common to hear patients in their late 30s and early 40s tell us, “At the end of the day, after eight hours on the computer, my eyes feel tired, and it takes me a while to refocus farther away.” Or they say, “I’ve got a dull headache behind my eyes.”

Unlike patients with blur at near, these patients can still accommodate, but it’s more taxing than it used to be. I compare it to working out as we get older. At 49, I can still do all the lifts I used to do, but I can’t lift as much weight or do as many reps, and my recovery takes longer. It’s the same when the eyes accommodate. The muscles can still do it and see clearly, but it takes much more work, which fatigues the eyes, and it takes longer for the eyes to readjust. By treating presbyopia, we can adjust the accommodative system’s workout, allowing it to work less so it takes longer to fatigue.

Correlation Between Symptoms and Testing
Visual acuity testing will show these patients are 20/20 at near. In my practice, to learn more about a patient who has tired eyes and delayed accommodation, we delve deeper with additional testing. A first step is to rule out dry eye, which has similar symptoms like fatigue and headaches. If that’s the problem, we can treat it and reevaluate the patient in six months.

If dry eye isn’t the cause, then we check cross cylinder and look at the amplitude of accommodation. These tests will show us, even in the absence of blur at near, if there is some deficit at near in the accommodating process. If there is a correlation between symptoms and testing, we know that the patient would likely benefit from presbyopia correction. It’s especially important that we identify early presbyopia today, because we are finally seeing new options to correct them.

The real challenge of presbyopia in younger patients is changing our mindsets so we consistently and accurately identify the problem. Treatments are available, and there’s room to customize the approach. It our responsibility as practitioners to become knowledgeable on current treatment options and find the best choices for our patients.

A Nurse with Blurry Vision
A 38-year-old woman was working four 12-hour shifts a week (increased from three due to COVID-19), where she spent long hours looking at screens. Late in her shifts, her vision was blurry, and she couldn’t bring it into sharp focus. The first thing I considered was dry eye, but a full dry eye workup showed she had a robust tear film. Her contacts were fitting and wetting well. Near testing showed she had some reduced amplitude, and her cross cylinders were plus 75. I realized that because I was seeing her on a day off from work, her eyes weren’t fatigued.

To alleviate near-point stress, I put her in trial lenses with a distance lens in her dominant eye and a low-add multifocal in the other eye. Two weeks later, she came back and told me she could see clearly, even at the end of a 12-hour shift. For a young person with a functioning accommodating system, we were able to provide the boost she needed to prevent fatigue.

A Busy Dad with Headaches
A man in his mid-forties worked on his computer and phone all day, watched TV at night, and was kept busy in his free time with four children, including coaching their baseball and football teams. He had no complaints about his vision, but at the end of the day, his eyes were “sore” and he had a dull headache.

Testing showed that his cross cylinder was plus 1, which in the past I may not have treated. We fit him in a low-add two-week multifocal. Now he says he has comfortable vision all day—a big change from his recurrent headaches.–Shane R. Kannarr, OD

New Lenses with Less Tradeoff
There has traditionally been some trade-off for treating presbyopia. Because we knew that contact lens patients with presbyopia had to sacrifice a little distance vision or switch to spectacles, we had them wait until the blur at near was intolerable before treatment. Most patients don’t want to give up their contacts for spectacles, and that’s especially true with younger patients who are busy working, commuting and helping with their kids’ activities.

Now we see that trade-off shrinking with recent improvements in multifocal contact lens technology, so I am more proactive. I often prescribe these patients ACUVUE Oasys Multifocal with Pupil Optimized Design (Johnson & Johnson Vision), keeping the prescription simple by following the fitting guide, and there is minimal trade-off at distance, if any.

More Options Are in the Pipeline
I like to have patients wear trial lenses for two weeks, which gives their accommodation system time to recover so they can see and feel the difference. Patients are often surprised that they can come home from work feeling good instead of tired. They no longer have headaches at the end of the workday. Identifying the problem and offering a solution greatly improves quality of life.

Currently, Allergan is introducing the first drop to treat presbyopia to the marketplace. Having a new option in the presbyopic space will generate interest in patients and practitioners alike.

Transitioning to Higher Adds
I want to keep patients, who like wearing contacts, in contacts as long as possible; as a result, I have many contact lens patients in their sixties and seventies. If we start patients in presbyopic correction earlier, not only will we alleviate their symptoms, but we’ll also help them begin to adapt to this style of optics. As they move through their forties and increase their add demands, I think they will adapt more easily because they’ve already become used to presbyopia lenses. We give them a little disparity and maintain their binocular summation, they adapt, and we can gradually increase the add power as their domains increase.

How I Tripled My Dry Eye Revenues

With presbyopia eye drops, plus contact lenses and glasses, you have more options than ever to ensure young presbyopes are able to maximize their ability to see and to enjoy life.

Shane Kannarr, OD, is the owner of Kannarr Eye Care, a Vision Source practice in Pittsburg and Girard, Kans. To contact him: skannarr@kannarreyecare.com