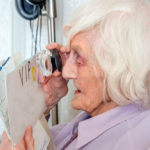 There is growing evidence that when older people’s brains have to work harder to see, declines in language, memory, attention, and other aspects of cognition, occur, according to reporting by Jane E. Brody in The New York Times.

The latest study, published in JAMA Network Open in July, followed 1,202 men and women aged 60 to 94 for an average of nearly seven years. All were part of the Baltimore Longitudinal Study of Aging, and had vision and cognition tests every one to four years between 2003 and 2019, Brody reports.

How Many “Active Customers” Does Warby Parker Currently Have?

“The researchers found that those who scored poorly on initial tests of visual acuity — how well, for example, they could see the letters on an eye chart from a given distance — were more likely to have cognitive decline over time, including deficits in language, memory, attention and the ability to identify and locate objects in space,” Brody writes.

Other vision deficiencies, such as depth perception difficulty and the inability to see contrasts, also had deleterious effects on cognitive ability.