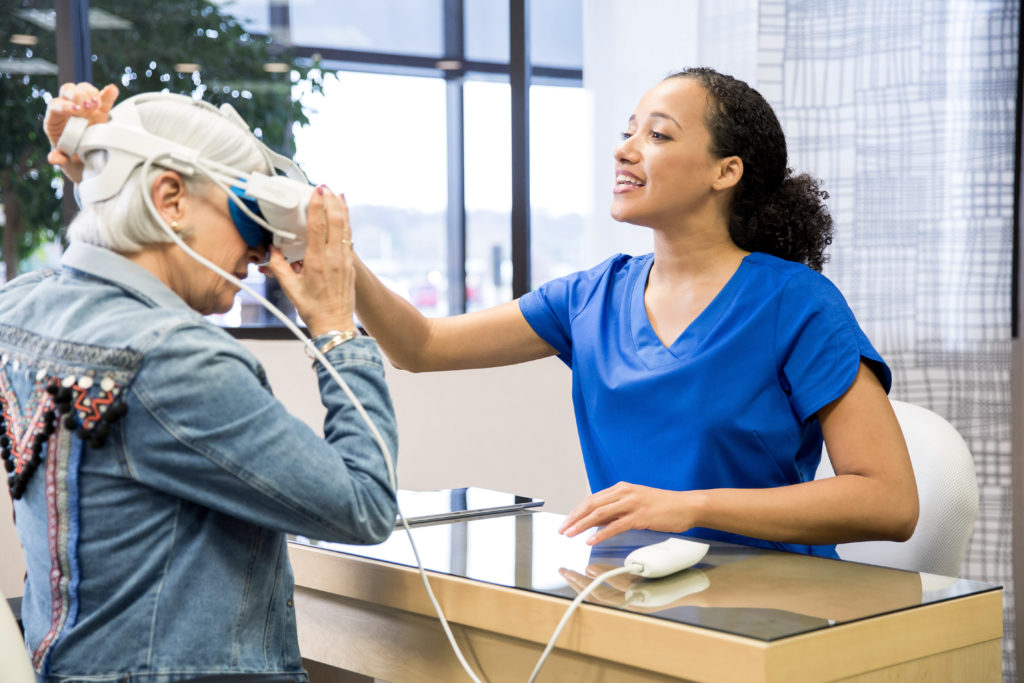 MacuLogix, Inc., has announced the next generation of dark adaptation functional testing with the introduction of the AdaptDx Pro guided by Theia.

The company’s original AdaptDx automated dark adaptometer was introduced in 2014 and  has since been used by more than 1,000 eyecare professionals to identify and monitor AMD.

The new AdaptDx Pro headset was custom-designed and tested for patient comfort and includes all the functionality and accuracy of the company’s table-top dark adaptometer. As a self-contained wearable headset, the AdaptDx Pro requires no dark room or external  computer and features an artificial intelligence-driven onboard technician named Theia.

After the in-office technician selects the testing protocol and places the device on the patient’s  head, Theia takes over to facilitate a reliable, consistent testing experience by using automated instructions and adaptive feedback spoken directly to the patient.

“What makes the AdaptDx Pro so special is that it combines high-tech innovation and high-touch patient care without sacrificing functionality or results,” says William McPhee, president and CEO at MacuLogix. “AdaptDx Pro makes it simple to fit dark adaptation testing into any practice workflow, and Theia frees up the technician to focus on other valuable tasks.”

Therefore, assessing how well patients’ eyes can adapt from bright light to darkness makes it possible to detect AMD at a subclinical stage.1 AdaptDx Pro guided by Theia offers a new way to measure dark adaptation in a clinical setting quickly and effectively, using an objective, functional measurement called the Rod Intercept (RI). Importantly, impaired dark adaptation as measured by the AdaptDx Pro is 90 percent specific and sensitive to AMD.

“Patients and staff love Theia. Her gentle coaching, combined with the well-designed, comfortable headset puts patients at ease and frees up technicians while testing takes place,” says MacuLogix’s clinical advisor Jeffry Gerson, OD, FAAO. “Ultimately, the AdaptDx Pro enables us to test more patients to find disease that we may have otherwise missed and start those patients on a treatment plan to slow disease progression.”

Years of development went into creating this medical device to improve the testing experience and make modern AMD management practical in almost any optometry or  ophthalmology office.

“After spending more than two years developing this technology, I firmly believe the AdaptDx Pro and Theia are going to change the future of AMD by eliminating virtually every barrier to in-office diagnosis and management of age-related macular degeneration,” says MacuLogix  co-founder and chief technology officer Gregory Jackson, PhD. “Not only is the entire experience improved for everyone involved, but the addition of Theia’s artificial intelligence helps ensure consistent, reliable testing results.”

The AdaptDx Pro launches this week, and MacuLogix has committed to providing current AdaptDx table-top device owners with the first opportunity to upgrade to the AdaptDx Pro. Eyecare professionals can experience the AdaptDx Pro guided by Theia in person and learn  about purchase and subscription pricing options at variety of local and national events, including SECO (Booth 838) and Vision Expo East (Booth MS4733) or online at  www.maculogix.com.