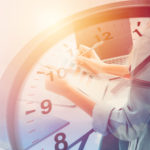 The New York Times reported that companies experimenting with a four-day workweek have experienced no loss in productivity and even some improvements.ii

The Progressive Lens that Just Works–for Both Patients AND Opticians

Now, Chick-fil-A is taking it another step with a three-day workweek. Chick-fil-A’s model condenses the workweek into three days. Employees have a set three days to work each week and work 13-14 hours per day (13 hours/day x 3 days/week = 39 hours/week). Employees then have four days off.

Currently, this model is only being used at one location in Miami. As with anything new, there are always many things to work out such as: logistics of scheduling, time off and retaining benefits. These are the same issues an eyecare practice needs to address.

Benefits for Team Members
The benefits for team members for a work schedule that only takes up three days are: childcare planning, taking on another job and having more days free to do whatever they want to do.

References
i. Chick-fil-A Tested a 3-Day Work Week and the Result Is Stunning (thetakeout.com)