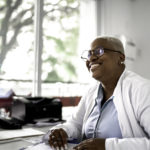 Have you felt mistreated lately? The answer to that may be “yes” if optometrists are experiencing anything like what respondents to a recent poll of MDs, published by JAMA Network Open, reported.

Nearly one-third of doctors in the U.S. have experienced mistreatment from patients or their families, including racist or sexist remarks, a study published Thursday found, according a synthesis of the report by Brian P. Dunleavy, posted to the website of news service UPI.

Among more than 6,500 responding physicians from across the country, just under 30 percent said they were “subjected to racially or ethnically offensive remarks” within the past year.

3 Reasons Why Your Optical Inventory Should Be Online NOW!

A similar percentage indicated they had had “offensive sexist remarks” directed toward them at least once over the past year, while just over one in five said they experienced “unwanted sexual advances” from patients, their families or other visitors over the same period, the researchers said.

In addition, roughly one-in-five physicians surveyed said a patient or their family refused to allow them to provide care because of the physician’s personal attributes, such as race or gender, according to the researchers.