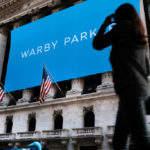 After ringing the bell to open trading on the New York Stock Exchange (NYSE) last week, Warby Parker Inc. executives saw shares in the company get off to a flying start via their nontraditional direct listing, according to reporting in Vision Monday.

The opening trade in Warby Parker (ticker symbol WRBY) was priced at $54.05 per share, which valued the company at about $6 billion. That market cap valuation moved even higher as shares subsequently hit an intraday high of $54.72 in trading on the NYSE.

Warby Parker shares closed the first day of trading at $54.29. The “reference price” assigned by the NYSE before trading began this morning was $40. (This was much higher than the private trades in Warby Parker shares earlier this year, in the $24 to $25 price range, as noted in the company’s SEC filing in August.)

According to its filings, Warby Parker’s registered stockholders had planned to sell up to 77.7 million class A shares in last week’s offering. The company’s main investors at the time of today’s offering were Tiger Global Management, T. Rowe Price, General Catalyst, D1 Capital Partners and Durable Capital, according to its filings.

Warby Parker announced late last month that it had filed a registration statement on Form S-1 with the Securities and Exchange Commission (SEC) relating to the proposed public listing of its Class A common stock, as VMAIL reported.

The company noted via Instagram that it is “becoming the first public benefit corporation to go public through a direct listing. This pushes us even closer to our ultimate objective: vision for all.”

To celebrate this listing, Warby Parker said it had launched the Warby Parker Impact Foundation, “a public charity dedicated to helping people see—enabling them to thrive in the classroom, workforce and beyond.”