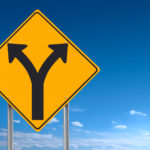 There is a saying, “Plan your work and work your plan,” which seems on the surface to be a good life philosophy. There is also another saying about when you come to a fork in the road, the one less traveled may be the best for you. If I had followed the first saying, my life would be quite different. Let me tell you how.

The Original Plan
Optometry was not my first career choice. Initially, I wanted to be a writer. I enjoyed my English and grammar classes, which was reflected in my good grades. In eighth grade I was selected to be editor of our school newspaper. Because I could write well, I also was chosen to give our eighth-grade graduation commencement speech. I continued to excel in this field in high school. In all my writing classes, especially creative writing, I continued to get excellent grades. I won a high school writing award my junior year for a short story and was selected as a semifinalist for a story about patriotism in a national writing contest my senior year.

The Evolving Plan
Then I realized toward the end of my sophomore year that writing was a difficult field to make a living in, so I decided to become practical. Around that time, I read “All Creatures Great and Small” by James Herriot about the life of a veterinarian, which inspired me. I always loved animals and related well with them. So win-win again, I would do something I would probably enjoy for a career, and as a veterinarian, I could provide well for myself.

It took some scrambling on my part my last two years of high school to get on track with the career change. Biology had been my only science course up to that point, so I took a lot of science classes. Since I thought it would look good on my resume, I joined the Young Engineers and Scientists Club. I participated in the science fair scene and ranked well with my project about animal nutrition. My local veterinarian took me to career day at the University of Missouri College of Veterinary Medicine. I still remember that dog heart full of worms that was on display. I stayed the course in college. My major was biology. I was on the dean’s list.

Unanticipated Complications
Then I found another fork in the road, my future husband. He was from New Jersey and graduated halfway through my junior year. His plan was to return to New Jersey and work the family business. So, against my family’s better judgement I was accepted at a college in New Jersey and I moved East. I liked Montclair State College and New Jersey. It was so different and exciting than living in the Midwest, where I was born and raised. I got engaged a few months later. So, the new plan was to apply to a veterinarian college in the region upon graduating. However, a new fork would soon arrive.

My fiancé had a falling out with his father and quit the company. This was around six weeks before our wedding, which was scheduled that August. The economy was not great in late 70’s, especially in the Northeast. You had the Arab Oil Embargo going on with the resulting gas shortages. There were also job shortages, high interest rates, and in New Jersey even finding an apartment was almost impossible. My fiancé could only find a room on the third floor of a nice home in Upper Montclair to rent. Thus, three weeks before the wedding, which was in Missouri, we decided to go back early. Our plan was that my fiancé would look for a job. If he found one, we would stay, which he did in neighboring Quincy, Ill. We found a great apartment with a golf course view. It was too late for me to transfer to another university, so I ended up working for a year.

The Fork in the Path that Brought Me Finally to Optometry
I wanted to finish my degree, so we needed to move close to a university. Columbia, Mo.,would have been a good idea since a veterinary college was there and I could network better. However, the job market was still bad, so nothing decent was available for my husband with his business degree. So, we chose St Louis, a larger city where we hoped there would be more employment opportunities. I enrolled in the University of Missouri St Louis.

My 3 Most Powerful Practice Improvements

How We Avoided Revenue Loss for Our Practice

Then I came to another fork. My biology advisor was recruiting for the new school of optometry at the University of Missouri that had just opened that fall. He suggested that I apply. Truthfully, all I knew about eyes was my experience wearing glasses for my low myopia. I disliked my first pair of glasses and did not wear them much. I did not even know the difference between optometrists and ophthalmologists. Imagine my chagrin later when I remembered that I talked about getting my eyes dilated at my eye exams during my application interview. Obviously, my doctor had been an ophthalmologist because optometrists could not dilate eyes at that time. Fortunately, the rest of my interview went well and my grades and OCAT scores saved me since I was accepted for the following year contingent upon my graduating with a biology degree.

This final switch ended up well for me. I really enjoyed my optometry school experience and my decades of serving the public as an optometrist. Then, ironically, I retired early and decided to take up writing again. Looks like things went full circle.