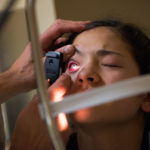 The COVID-19 crisis has hit New York City the hardest in the country, with the city now the epicenter of the pandemic in the U.S. Eyecare Providers in New York are doing their part by encouraging patients to visit them, rather than the emergency room, for eyecare emergencies, according to reporting by Michael Herzenberg on Spectrum News NY 1.

“We’re here to be able to leave the emergency rooms open for the true emergencies,” the owner of Metro Optics Eyewear John Bonizio tells NY1 News.

The optometrists who work for him handle eye-related emergencies like infections, allergies, problems with vision and conjunctivitis. Handling those emergencies frees up space and doctors in emergency rooms and walk-in clinics.

Patients at Metro Optics Eyewear have to call first so they can be screened.

“Triaging on the phone, asking those questions, trying to differentiate,” between COVID-19 symptoms and allergies says Lori Scerbo, OD.

“It’s April now and that’s normal for a lot for people to have,” says Dr. Scerbo said of allergies.

COVID-19 Roundtable on Eyecare Strategies During the Crisis

She’s only able to use one of the exam rooms. Metro Optics is storing completed orders in the other exam rooms for delivery or pickup from its other four locations, which are closed. Despite the temporary closures, owner John Bonizio says he’s still paying all 57 employees.

It’s a bridge loan until he’s able to get government assistance from the Small Business Administration’s Paycheck Protection Program passed by Congress. It should cover him until July.

In July he explained, “The bank will come back to you and say to you OK, where did you spend the money, show me. You show them payroll reports, you show them checks and so forth, then the government will forgive the loan.”