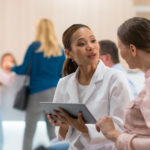 What is it like for a practitioner who has made the transition to greater patient-centered care through use of a healthcare registry? For this article, we interviewed Chris Cooper, OD, whose practice is located in Western Tennessee. The insights he shared with us highlight the immense untapped potential we have as eyecare providers (ECPs) to help our patients.

Dr. Cooper changed the way he delivers care to his diabetic patients, and is learning how to take that same approach with all of his patients. “The transition has been amazing and worth the effort,” he said.

Learning Patients’ Backstories
Dr. Cooper learned that every patient has a story that will tell him how he can best help that patient. Until now, Dr. Cooper never knew the importance of the patient’s story.

To dramatically affect the outcomes of his diabetic patients, Dr. Cooper learned that he needed to give the patient information that empowers them to make good decisions on a daily basis.

Key Steps in the Transition
Screening for Diabetic Retinopathy is One Thing You Need to Do, Not the Only Thing
Dr. Cooper’s first step was to decide that he wanted his patients to receive the best evidence-based medical management for their diabetes possible, delivered by best-practice methods. He quickly realized that doing nothing more than screening for diabetic retinopathy during a patient’s diabetic eye exam doesn’t fulfill either of those goals.

The Diabetes Control and Complications Trial, as well as other studies, clearly showed that helping the patient better control their diabetes dramatically affects the incidence of diabetic retinopathy. The highest level of value we can bring to our diabetic patients is to reduce their risk of developing retinopathy, rather than just detecting its presence.

Educate & Empower the Patient
The next part of his transition was to realize that, in the past, his approach was dependent on the primary care physician (PCP) to educate the patient in the best ways to control their condition. Healthcare reform shows that if we want to empower patients, the most effective way is for providers to work together as a team to coordinate the care of the patient. As part of the patient’s care team, he wanted to take a more active role to help empower the patient.

Join a Healthcare Registry
The third step in the transition was realizing that he would not achieve the goals of healthcare reform without joining an outcome-based healthcare registry. Joining a registry allowed his office to deliver a population-management approach to diabetic care. This was the key element that made everything come together. Outcome-based data provided the guidance on how to continuously improve the way care is delivered.

The Power in the Data
The registry not only allowed him to see the result of the care he had delivered over the past couple years, but also to compare it to results from other ECP offices. Until Dr. Cooper actually saw outcomes data for eyecare, all the things he had read about, and the things he had to do for Meaningful Use and MIPS, were confusing. One look at the data and everything became clear. The data opened a new world of opportunity for his office.

For example, the data showed obvious trends that stood out. At previous visits, he noticed that many patients were almost controlled with an HbA1c just above 7. But at their most current exam, a large percentage of these patients had a higher HbA1c, often 8 or above. The data showed him two things:

1. Patients in different populations have completely different issues. He realized the conversation with patients who had gotten worse should be significantly different from conversations with those who were improved or stable.

2. Only the patient knows the challenges they are facing in getting better control over their diabetes. Clinical skills and diagnostic equipment do not address the daily issues impacting the patient’s diabetic control. Taking the time to understand the patient’s story is one of the most important skills that we as providers need to hone.

How to Empower a Patient
Looking at the care he was delivering through this new lens, Dr. Cooper quickly realized that he was saying the same thing to every diabetic patient who didn’t have diabetic retinopathy. He showed them a few fundus pictures, so they would know what retinopathy looks like and would understand what he was looking for. He suggested they follow the instructions given to them by their PCP to control their diabetes.

He realized that his explanation was not empowering the patient, it was just telling the patient what he thought they needed to know. When he started listening to the patient’s story, he realized the patient was telling him what they need in order to improve their outcomes. Some only need better motivation, some clearly need more education, some were making decisions based on incorrect beliefs or misunderstandings. By listening to the patient’s story, he now knows how to write a care plan that addresses the needs of the patient in a way that empowers the patient to be able to make better decisions on a daily basis. He realized that his patients need to know it is their behavior, choices and habits that affect their risk for developing diabetic retinopathy.

There’s Power in the Patient Story
Dr. Cooper read the “Empowering the Patient” series of articles written by the team at HealthCare Registries. These articles recommended that you ask every patient with uncontrolled diabetes two questions:

1. What keeps you up at night worrying when you think of having diabetes?

2. What challenges have you had in getting better control of your diabetes?

The patients’ answers to Dr. Cooper’s questions were the heart and soul of his transition to value-driven care. He never recognized that there was a  different level of care that he could deliver that was right in front of him. He also realized that the responses he gets from patients fall into a few broad categories. One of those categories of particular interest is “fear.” Almost all patients with diabetes are fearful of some undesirable effect on their health or lifestyle. Patient fears puts us front and center as one of the most important members of the care team as losing vision is one of the most common concerns of patients. We are key members of the care team to address those fears.

Case History #1
A 47-year-old male truck driver reported being diabetic for about six years. He did not know his HbA1c. Dr. Cooper’s access to a registry enabled him to track a validated HbA1c reading on this patient from another doctor prior to the patient’s appointment. His exam determined that there was no retinopathy. At that point, Dr. Cooper realized that he needed to know the story that led to this patient having an HbA1c of 15. His plan was to get the patient to open up and talk to him.

In an empathetic way, Dr. Cooper asked the patient the two questions cited in the previous section of this article. It took a few minutes before the patient opened up to tell Dr. Cooper that it was difficult for him to control his diabetes because he lives in a truck and that he spends $300 a month during the winter just buying gas to keep warm. Despite his gruff exterior, this patient started crying, with tears running down his cheek, as he told his story to Dr. Cooper.

Most certainly, this was not your typical eye exam. Dr. Cooper realized that if he had used his old way of delivering care, this patient would have come and gone without Dr. Cooper having any idea of the health and life crisis he was experiencing. In the past, Dr. Cooper did not have as easy and convenient access to validated HbA1c readings, and typically didn’t ask those questions since the patient didn’t know his HbA1c. The exam, therefore, would have been completed without that key information. He told the patient that having an HbA1c of 15 puts him at a high risk of eventually developing diabetic retinopathy, and in the short-term, it puts him in an emergency situation with his diabetes that could impact his whole body. He told the patient that he could make an emergency referral to the patient’s PCP as well as to an area social agency to help with his homelessness. The patient told him he would be “most appreciative” of anything he could do to help.

Case History #2
Homelessness is affecting many people in Western Tennessee and the Memphis area. A 65-year-old female, who was overweight, came to see Dr. Cooper. She lived in a low-income neighborhood, where she did not have access to healthy foods, and often ate at fast-food restaurants. She had never received nutritional guidance. As a result, her HbA1c was 11.5. Her story was that she couldn’t afford to feed herself and her family with healthy food. Dr. Cooper referred her to a local food bank and to other public assistance programs.

There are resources to help struggling patients, but the organizations that can help have a problem identifying who wants to be helped. In this case, Dr. Cooper identified a person who was asking for help. His office initiated a crisis-management referral. The organization that he referred the patient to was appreciative of the referral. The patient said she “will do whatever they ask me to do.”

Dr. Cooper learned that every person with diabetes has a story that offers clues for how best to empower that person to better care for themselves.

Listening to the Patient
The key to delivering patient-centered care is as simple as listening to the patient’s answers to those two key questions and letting them guide the care plan. Since he began asking the questions, Dr. Cooper has transitioned to patient-centered care. Now every patient has an individual care plan that addresses their unique critical issues and empowers each of them. Dr. Cooper uses HealthCare Registries to track his patients’ outcomes so that he can monitor the effectiveness of his care plan.

Registry data and empowering the patient made Dr. Cooper realize that he had to make the transition to patient-centered care, and that analytics are what guides our approach. Without it, Dr. Cooper admits that he would likely still be delivering care the same way he did in the past. His efforts to make the transition have resulted in his office delivering care that is validated with data showing better results.

In addition, these efforts have resulted in significant practice growth as he now regularly gets physician referrals from providers who want their patients to get the best outcomes possible.

James E. Grue, OD, is a health-care reform speaker and consultant. To contact him: JimGrue@HealthCareRegistries.com

Ronald P. Snyder, OD, FAAO, is the president and CEO of HealthCare Registries, LLC. To contact him: RonSnyder@HealthCareRegistries.com