Building a new office literally from the ground up lets youcreate the ultimate space needs–foryour patients and your practice. And new office space can be a tremendous practice builder.

When buying or renting an existing office, it can be hard finding exactly what you have in mind. For that reason, when it came time to move from my current office to one that could keep pace with my practice growth, I decided to build it myself. The new office is on schedule to be move into the new space on Nov. 15. Building your own office is a challenge in which you have to track finances and timelines for completing the project and work closely with contractors and designers. When completed, however, the result is potentially very rewarding. 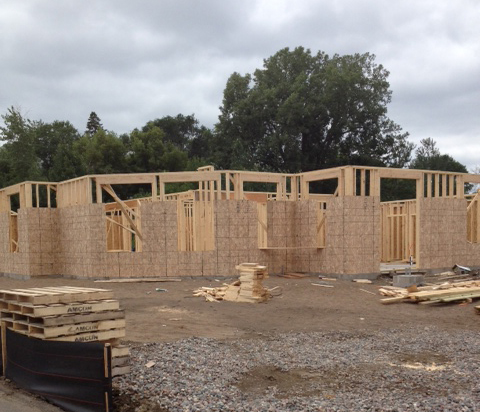 The frame of Dr. Wesley’s new office in the early stages of the building process.

How Do You Know When It’s the Right Time?

I knew that my first location was not my “forever space” due to a number of factors: parking was limited, the space was limiting in terms of exam rooms and space for equipment, and eventual access from the main road was going to be cut off. Patients would have had to access my building via a back-access road that would be difficult to find. Knowing this, I started the exploration about three years ago into where I could build or establish ownership of a professional space. I knew that it would take a while, and actually started looking far before I knew I could afford it.

I didn’t want to miss out on the limited commercial real estate in my area, a suburb of Minneapolis, and there was one particular spot I was interested in. I started running projections that included my real data regarding number of exams, professional fees, contact lenses sold, glasses sold, and all my expenses–kind of a “future looking” income sheet. I would put the real data next to what I thought I could possibly do in the next five to seven years. I kept up this sheet by substituting real numbers in for projections once I had that data. I would make notes as to whether I had exceeded or met my projection goals. The main factors were looking at what new rent costs would be, in addition to new staff costs, assuming we needed to add more staff with building expansion and growth. So, in effect, I started to see patterns that helped me decide it was time to move forward.

I sought out SBA funding and locked in at a set rate for the next 25 years. My plan is to have all of the new building’s construction expenses paid off in 15 years or less (depending on how my accountant plans for tax benefits). I hope to be profitable within the first year after the move, however. The other item to remember is that all the rent I was paying out before is now being paid to myself (the new company I created to own the land/building has a lease with my practice). Most of it initially will go toward mortgage/building payments, but it will eventually be another source of revenue personally. 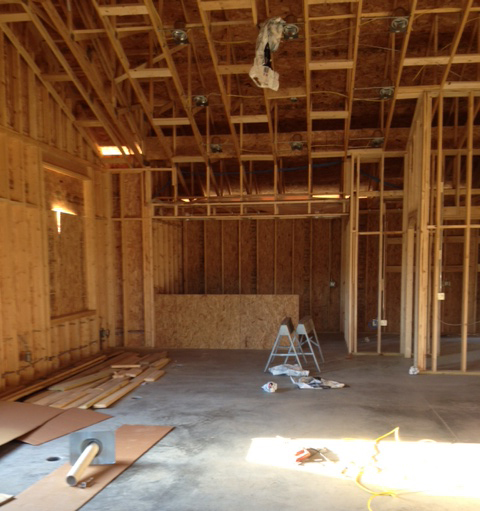 What will be the optical and reception area of Dr. Wesley’s new office.

In addition to what is mentioned above, I tried to search and get my hands on any and all optometric building projects and their associated publications to see what they said. I also made sure I did research on practice metrics to be sure I was in line with the “norms” out there, but I can’t stress enough that you shouldn’t only compare your practice to the norms, but to itself. Oftentimes, just because my numbers were possibly better than or worse than the industry averages, I still realized that to move my practice forward I had to improve those numbers appropriately when comparing to my previous metrics. For instance, I would set a goal based on a certain percentage increase in number of exams over the previous year, or a decrease in the percentage of cost of goods in one particular area.

I first started working with a commercial real estate agent. He was instrumental in helping me navigate the appropriateness of what the seller was proposing. There are many factors in purchasing land in which to build upon that I wouldn’t have had any idea about, such as the covenants created within the neighborhood association that dealt with parking and water access. Next, I started to interview builders. I decided I wanted to approach this from the design/build process, meaning that I had my builder involved right from the start to help keep costs in check with what the architect was designing. From my own initial build-out experience of my current space I leased, I knew that architects can sometimes design a fantastic space, but not necessarily keep budget in mind. In order to save time and money, involving the builder upfront can help answer the, “Can we use that material here? Or create that look there?” questions, all while remaining in budget.

I interviewed three different builders. I told them my budget, and had them create an initial projection to see what they came up with. Amazingly, even though I told them an exact number I didn’t want to exceed, only one of the builders heard me and came in line with what I was looking for financially. I believe the others heard the words “medical facility” and took too liberal of leaps in assuming what would be acceptable. They were wrong! Based on me picking the builder who actually heard me (and came highly recommended from several optometric colleagues), he then suggested an architect who would fit in with my style. 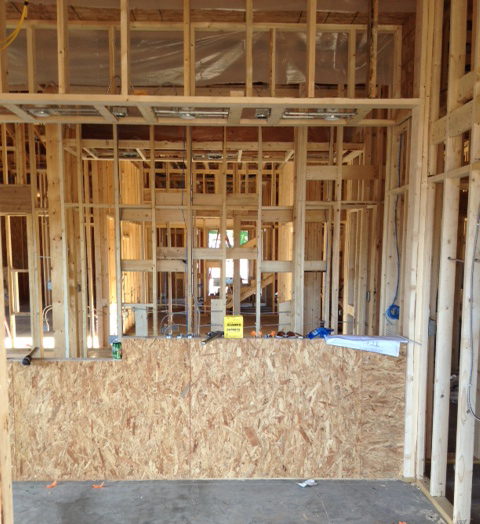 The spot that will house the front desk in Dr. Wesley’s new office.

The best advice I can give is be candid. This is not the time to be passive and acquiescent when it comes to agreeing with specific ideas. From the moment I met my builder, I wanted no pretenses about my overall style. I let him know that I was detail-oriented, and had very specific ideas about what I wanted in my space. Having known that he had worked with other ODs, I wanted to clarify that I had some different ideas that would possibly be brand-new concepts in the optometric design feature, and he needed to be alright with that. I know some ODs who just can’t decide on certain aspects, and are willing to delegate that to the builder/architect. For instance, I delegated window design and the upstairs facility space and the overall building exterior look. There were changes/approvals by me over time, but I left that to them.

Whatever your style, I just encourage you to know who you are and make sure your team is aware of that. At this point, I’m still building, and I know my builder and architect are very appreciative of the decisions I make. They’ve told me they would rather have clear expectations of the looks and design and budget I want to meet than have me hem and haw over various aspects and then decide mid-stream to change my mind. That’s inefficient and expensive for everyone.

As part of my agreement with the building team, I have more than a year to address any aspects of the finished building that I feel needs improvement, and I have a full year to have things “fixed” as necessary.

Agree to Payment Plan for Building and Design Job

I have an agreement with my builder in which I paid a very small down payment. (Less than 0.5 percent of the overall cost). Once I had funding from my lender, some of the larger fees were collected for design services. There is a certain percentage that’s retained for contingencies (which hopefully won’t arise), and that will be given back to me by the builder at the end if not used. My hope is that detailed planning upfront will help me save this money. I also have a portion of my contract that states if the builder is not finished with the facility by a certain date, he starts to pay me each day he is late to compensate for lost time and the higher fees I would have to pay to my current landlord. 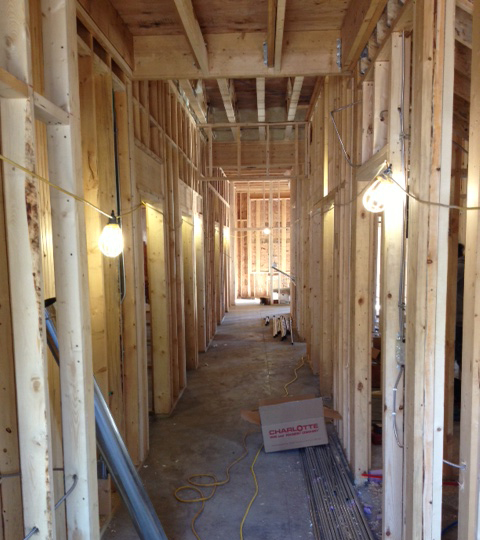 The hallway in Dr. Wesley’s new office that will lead to the exam lanes.

Forego Costly Building and Design Consultants–If You Can

I did not use a consultant, however, I think for the doctor who needs someone to help navigate decisions and doesn’t exactly know what they want (just that they want a new building), a consultant may be valuable. Consultants range in price from the thousands of dollars on up depending on what the doctor needs. Don’t underestimate your current equipment reps as “consultants” of your space, as they have often seen many doctors’ offices and are observant of what works, especially in relation to their technology and efficiencies.

Use New Office Space As Opportunity to Implement Practice Changes

I absolutely had ideas about what I wanted in my new office space, and had read many, many articles and blogs about input from ODs and MDs alike in the best of office plans for flow and function. I essentially created my “want” list of number and type of rooms, how the flow should work (a few examples: technicians have the prime spot, everyone else flows around them, optical/waiting area combined), and specific finishes and looks. Then, I handed this list to my architect, and she started creating layouts that would be compatible with these components. We continued to modify and modify until I had a plan I felt settled with. Just today, actually, I walked through the space with my “team” of people (architect, builder, IT, phone, staff, project manager, site manager, electrician, equipment consultants) to make marks and notes about outlets, data/internet, and lighting and to make sure the space would flow.

Research the area(s) you would like to build, costs on building (and make sure you estimate at least 1.5 times more than what you initially think) and layouts.

Dofinancial projections to see what’s actually feasible. Re-work numbers backwards so you know how many patients or dollars you need to be bringing in to make it possible.

Prepare to be patient. The planning and building process takes time. It was three years from the time I started looking into this until the time the building started. Plan on at least a year, even if things seem to be moving “quickly.”

Ready to Open a Second Office? Assess Finances and Logistics

Elements of a Well-Planned Office and Dispensary

Designing an Office with a Feeling

Gina M. Wesley, OD, MS, FAAO, is the owner of Complete Eye Care of Medina in Medina, Minn. To contact her: drwesley@cecofmedina.com.