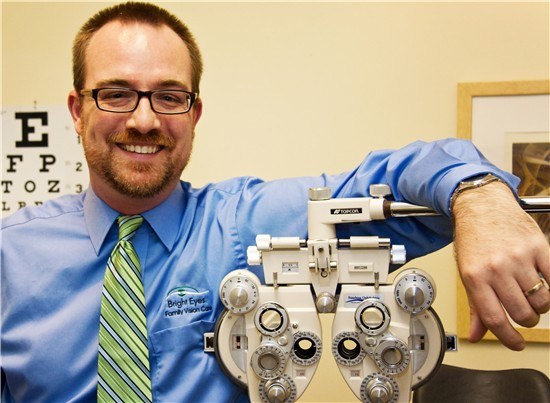 I use Facebook all the time for work and personal reasons. So it is impossible not to notice that it’s in the news lately. Some stories, like Facebook reaching 1 billion users, are good news for the company. However, much of the discussion centers around changes that Facebook has made that make it less effective–not easier–for optometrists to use in marketing their practice. Because most ODs don’t get into the nitty gritty of Facebook mechanics, I wanted to bring everyone up to speed and provide some ways to deal with these changes.

First, let’s look at the following chart. It shows the general downward trend of Facebook’s stock price since its poorly executed IPO. As you can see, it continues to hover around 50 percent of IPO price. This is not the way it was supposed to work out. For the first time in its short life, Facebook has to deliver not just experiences, but actual dollars to its shareholders. And many people think it is not going to be able to meet these expectations due to lack of mobile monetization strategy, slowing growth in the US, privacy concerns and loss of user experience focus.

In an effort to squeeze more revenue out of its users, Facebook is changing everything from what you can do on its network, to how it distributes the information, to what kind of ads it shows. You may have experienced some of these changes, while others are still being rolled out and tested.

Heads-Up on Facebook:
More Changes to Come this Year

Page Administrators – Now when you appoint someone to be an administrator of your Facebook page, you can select different levels of authority. This is nice if you don’t completely trust your administrators.

Scheduling Posts – For a long time people used third-party applications like Hootsuite to prepare updated posts ahead of time to be posted later. By clicking the “clock” at the bottom left of the status update box, you can now do this in Facebook, but it is a little clunky.

Page Manager App – For a while now, updating a Facebook page by phone was annoying at best and impossible at worst. This app changed that.

Editing Comments – Hate that little typo in your brilliant reply? You can edit it. But not the original post.

Collections – In an effort to take on Pinerest, Amazon and eBay, Facebook is starting to let businesses post images of purchasable products that users can “collect” and share. This has potential for optical, but it could be a dud. Time will tell.

Let’s look at some of the changes:

Timeline: As almost every Facebook user knows by now, earlier in 2012, Facebook changed the appearance of profile or page updates. Instead of all updates being listed in a similarly single column (like your Facebook news feed), the Timeline includes a cover picture at the top and has two columns of posts, emphasizing pictures and videos. For brands with glossy professional photos, this really is a nice presentation. But for the average optometry practice, it takes more work to decide how to post status updates.

Reach: While Timeline is a change, it can be argued that it doesn’t really make that much difference because almost all interaction occurs not on the Timeline, but in the News Feed. When a patient shares a post from your office, their friends see it, giving you more influence. However, not all of your fans see your posts because Facebook controls who sees what with EdgeRank. In reality, only between five percent and 20 percent of fans see a given post. And Facebook has recently changed the algorithm to further reduce the overall number of people that each post will reach.

Promoted Posts: But you are in luck. Facebook has a new way to help you reach the people who have already liked your practice page. For a fee, Facebook will share your posts with more of your fans, as well as friends of fans. This is called “Promoting” the post and it is different than placing an advertisement on Facebook, because ads appear in the right column and can be blocked with ad-blocking software. These Promoted Posts appear in the news feed. They are effective at getting likes and comments, but not necessarily from potential patients.

Mobile ads: And speaking of ads, the most recent significant change to come is that the mobile version of Facebook now contains ads, too. These appear to be more effective, because of the small screen size, but also more annoying. Finding a good balance will be tricky, but it is an absolute necessity for Facebook, since one out of every five new page “likes” occur on mobile devices.

Recommendations
First, a caveat. I do not think it is a good idea for the typical optometrist/owner to be the primary person creating and posting content on Facebook. But I do think they should know enough about Facebook to ensure that their staff or social media consultant is doing the right things.

So, how exactly should you deal with all of these changes with Facebook? While there is no silver bullet, here are some options:

1) Diversify: Certainly include Facebook in your marketing mix, but don’t confuse “being on Facebook” with “social media marketing.” Consider additional social applications, such as Twitter, Pinterest, Google+ and blogging to get your message out.

2) Post strategically: More than ever before, you must work harder to make each post seen. Be sure to use images and video. Tag others in your posts. Post at different times of the day when your patients are most commonly online. This is often early morning and late afternoon. Don’t forget weekends.

3) Sponsored stories: For the posts that you REALLY want to get out there, such as an event announcement or new product, promote them. But use the promotion tool infrequently, because it is so easy to wind up spending more than you intended over time. And remember, all you are doing is buying more visibility for a Facebook post, but you still don’t control who sees it.

4) Arm yourself with knowledge: Let’s face it, Facebook is complex now. It used to be easy, and that was part of the charm. Now you have to read to keep up. In addition to eyecare sites like Review of Optometric Business, check out Facebook-specific sites like the official http://www.facebook-studio.com and the unofficial http://allfacebook.com/

As the saying goes: “Change is the only constant.” And change happens quickly in the social media realm. Today’s shiny object is yesterday’s MySpace. Facebook surely is not dead, but it isn’t the good old days, either. While simply using Facebook was enough, it is now harder to get your message out and reach patients than ever before. But don’t let that stop you.

Nathan Bonilla-Warford, OD,of Bright Eyes Family Vision Care in Tampa, Fla., is a graduate of Illinois College of Optometry. He is a member of the American Optometric Association, and is past president of the Hillsborough Society of Optometry, as well as chair of the Children’s Vision Committee of the Florida Optometric Association. To contact him: Doc@BrightEyesTampa.com.