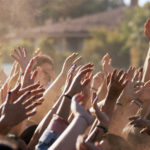 Carol Rymer OD, is the associate dean for clinical programs in the College of Optometry and a former officer and optometrist in the U.S. Army, which constantly warns troops to wear ballistic eyewear to protect their vision. She and Professor Karl Citek say people who take to the streets should take care of their eyes. They can do so by:

Wearing wraparound-style glasses with polycarbonate lenses, not glass or plastic. The protective glasses don’t necessarily need to meet military specifications, but they should be designed and built to not shatter.
Wearing full face protection that covers the eyes and mouth to avoid smoke, gas and other airborne irritants. Otherwise, goggles will help protect the eyes, but they shouldn’t be vented.

Using lots of water. If the eyes are irritated by a gas or smoke, “irrigation is the answer,” says Citek. “Copious irrigation,” says Rymer. Small amounts won’t help much, and rubbing the eyes can make things worse.

Leaving contact lenses at home. Soft lenses can absorb gases and other irritants and should be cleaned with saline solution, rather than regular tap water. Contacts “tend to be compromised,” Rymer says.

Leaving the most intense hot-spots. When and if the situation on the streets escalates, “get your butt out of there,” Citek says. “That’s always the first and best way to mitigate any serious injury.”

Seeking aid. People whose eyes are damaged or irritated by projectiles or gas or smoke should “seek care immediately,” says Rymer. “The sooner you can get care, the better the possibility of a positive outcome.”

These measures are especially timely in this time of political and social unrest, but they also make sense for more mundane tasks, such as working under a car, Rymer says.