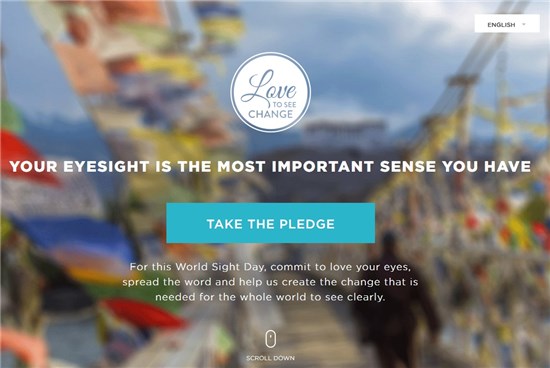 In honor of World Sight Day on Oct. 13, The Essilor Group is asking people worldwide to commit to have their eyes checked. For each pledge taken, Essilor will donate one dollar to a selection of initiatives that are bringing good vision to underprivileged or under-served populations around the world.

With the “Love to See Change” campaign Essilor wants to raise awareness on the importance of regular eye checks – and on the global public health issue that uncorrected refractive error represents – so that everyone in the U.S. and internationally can have the vision correction they need to learn better, work better and live better.

“Having your eyes checked on a yearly basis is fundamental to protect the most important sense we have as human beings: our sight. At Essilor, we are committed to visual health for all, including the 2.5 billion people in the world who do not have the vision correction they need,” says Jayanth Bhuvaraghan, Essilor’s chief mission officer. “Through this pledge, we hope to encourage everyone to commit to love their eyes, spread the word and join us in creating the change that is needed for the whole world to see clearly.”

On www.lovetoseechange.com, a dedicated web site available in six languages, people wishing to support this campaign can take the pledge and choose the initiative they would like the Essilor Group to support on their behalf. This campaign starts October 13 and will last until end of the year.

On World Sight Day itself, the Essilor Group will organize events in 40 countries to raise public awareness on the importance of good vision for all. Thanks to the involvement of internal teams, along with eyecare professionals, Essilor and its partners will offer vision tests in the streets, shopping malls, train stations, schools and other public places around the world, from India and the U.S. to Germany, Australia and Thailand.