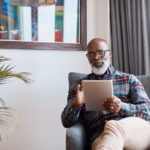 With interest and utilization of telemedicine services rising across eyecare, as well as other healthcare settings, a presentation by Christopher Brady, MD, of the American Telemedicine Association (ATA) provided an overview of where telemedicine may be headed as many industry executives joined virtually the first session of this year’s VM Leadership Summit on June 23. The session, titled VirtualEYZE!, examined the opportunities for telemedicine to expand eyecare’s boundaries and featured the perspective of Brady, an ocular telemedicine expert and past chair of the ATA’s Ocular Telemedicine Special Interest Group.

Registration is still open to the Aug. 11 program, which includes on-demand access to the June 23 VirtualEYES! event as well. Registration includes both virtual broadcasts, full access to the VM Summit virtual platform, networking, on-demand viewing, door prizes and exclusive access to attendees-only content after the event. Optometrists, opticians, ophthalmologists and students can register for no charge. All other industry registration is $99. Details and registration information is posted HERE.

Brady, the Summit’s lead-off speaker and scene-setter, noted that telemedicine has provided new ways for doctors to connect with their patients, particularly as it related to the COVID-19 pandemic. He said he believes ATA has grown in influence during the pandemic “as a voice advocating for increased coverage of telehealth,” as well as a relaxation of some of the other guidelines and rules around telemedicine. (ATA is a hybrid trade and academic association, Brady noted.)

“There was a time when [telemedicine] was a bad word, and if I were giving a presentation it would start out with me getting dirty looks,” he said.

In some ways, however, ATA was ahead of the curve in anticipating the rise of telemedicine in the U.S. The association published the third edition of its guidelines for ocular telemedicine, a document that specifically spoke to diabetic retinopathy screening, about 16 months ago, or right as the pandemic was hitting. The group was trying to branch out into new domains, including artificial intelligence and new disease states, including macular degeneration and glaucoma, Brady said.

One of the key benefits of telemedicine, he noted, is that it helps address what in public health is called the “inverse care law.” This is a situation in which the resources needed to treat a disease are exactly not where that disease is most prevalent.

He also noted that, for a time, there was “a fear that telemedicine was taking people out of exam chairs, and that is not at all what we are trying to do. People are not having access to the care that they need, and what we are really trying to do is bring that examination room to the patient. … If that’s what we’re trying to do, how can you argue with that?”

An interview examining telemedicine’s expanding role in vision care with Wally Lovejoy, an independent health care consultant, specializing in eyecare and optical retailing, and Julian Roberts, executive director of the National Association of Vision Care Plans (NAVCP), kicked off the second component of a three-part session of VirtualEYZE! as part of the June 23 VM Leadership Summit program. During the discussion, moderated by Marge Axelrad, SVP and VM editorial director, Lovejoy and Roberts explained how payors are reimbursing for remote, comprehensive eye exams conducted by an OD.

As telemedicine in the vision care field has been gaining traction, both before and during the pandemic, Lovejoy and Roberts highlighted what optometrists need to keep in mind as they get involved with remote exams.

The Eye Clinic Cyberattack that May Have Exposed 500,000 Patient Records

Lovejoy said state laws do vary and it can be really complex, particularly for optometrists as they’re trying to figure out how and when to provide comprehensive eye exams using telemedicine. “One of the first issues that comes up is that some states have established requirements that an in-person exam is required. Or some states require just a regular comprehensive exam every two or three years, meaning that perhaps in between those exams a vision test to renew a prescription might be OK, even though those would not be reimbursed under current vision plans.”

Another stand-out session of the June 23 event was the telemedicine panel moderated by Mike Rothschild, OD, an optometric practice consultant and authority on the delivery of eyecare through all forms of telemedicine.

Rothschild noted that he sees unlimited opportunity ahead for telehealth/teleoptometry and that it also presents something akin to a “hybrid” model in the way it offers pathways to ODs to participate and to combine it with other areas of emphasis in their profession.

Evans, who moved away from corporate optometry about two years ago to look for other types of practice modalities, found a teleoptometry position with DigitalOptometrics, which she says has been “a really positive experience.” She added, “And for me, it began as a ‘want’ to address a need in under-served areas. … We take for granted that we often have such easy access to eyecare.” Teleoptometry is an opportunity to solve some of the issues related to providing care to patients in what are under-served communities, she said.

“We probably will be seeing more platforms introduced in the near future, thus adding to the variety and options out there for businesses as well as different practitioners,” Evans said. “It’s something that is so beneficial on so many levels that it can just can’t be ignored.”

The multi-part Summit program, “CREATIVE DISRUPTION, THE NEW NOW: How to Survive It. Why You Need It,” culminates in an in-person live + virtual event on Wednesday, Sept 22 in Las Vegas, called “Retail & Healthcare: UPENDED! Ripping Up The Rulebook.” Registration and info about that event will be posted soon.

The Platinum Sponsors of the 2021 VM Leadership Summit are EssilorLuxottica and VSP Global Premier Program. The Gold Sponsor is The Vision Council’s Vision Health Alliance and the Silver Sponsors are Alcon and Ocuco.