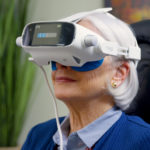 I started my practice cold in 1989 in what was, at the time, the fastest growing city in Oregon. Like most fast-growing cities, Portland offered a young patient population, with lots of 30-somethings and their kids. But, as they say, a practice ages with the doctor.

Change Is Often Necessary
Over the years, our city’s demographic slowly shifted and my patients’ needs started to change as the presbyopic population began to grow. More recently, in last 10 years, yet another shift has occurred. The medical side of my practice, which I had consistently grown over time, had a new set of problems. The allergies, dry eye, diabetes and conjunctivitis remained a part of my daily practice, but suddenly I was seeing a lot more glaucoma, cataract and AMD on top of this. This constant need to reinvent my practice has forced me to always be on the lookout for new ways to care for my patients that could also drive revenue for my business.

Most recently, I’ve substantially increased the scope of AMD diagnosis and care, which has benefited my patients and me in ways I could never have imagined. As you’ll see, the model is very straightforward and can be universally applied in almost any practice setting that has a modest percentage of patients over age 50.

New Technology Drives Medical Opportunity
In my first several years of practice, I dispensed a lot of glasses and contact lenses and didn’t see many medical optometry patients. This is in sharp contrast to the 65 percent, or more, of my practice that is medical today. Much of this growth can be attributed to a continuous commitment to new technology investments to address the changing needs of my patients. Vision Source has helped me select tools that position me as a leader instead of the last man on board with technological innovation and evolving standards in care.

With regard to AMD, the big game-changer in my practice was the purchase of an AdaptDx automated dark adaptometer. The national average CMS reimbursement for a dark adaptation test (CPT 92284) itself is $60.63 ($63.40 in Portland and $58.07 in the rest of Oregon, where I practice in the Tualatin area), which easily covers the cost of the instrument. Being able to identify patients who have AMD much earlier in the disease state, and then treating them and managing them much like I would a glaucoma patient, has truly elevated my standard of care for patients with AMD. Also, the fact that these patients already existed in my practice helped generate a positive cash flow quickly.

Dark Adaptation Testing and Monitoring More than Covers Costs
Prior to meeting me in the exam room, all patients complete a history, which includes eight questions to help me determine whether I should consider dark adaptation testing. Specifically, the history provides information on age, sex, eye color, race, light exposure, smoking history, family history, systemic disease history and any night vision complaints.

If the patient is over 50 and has a night vision complaint, I begin to explain why I believe they should come back and be tested with the AdaptDx. In my practice, this is not a small number. My goal was to perform eight dark adaptation tests per week, but so far that number is far higher. Furthermore, industry data conservatively estimates that approximately 30 percent of folks over 50 with a night vision complaint will fail the rapid test for dark adaptation, helping me to determine if they have subclinical AMD. With just eight billable tests per week, we would realize more than $1,800 in revenue a month from dark adaptation testing alone.

When initial dark adaptation testing reveals a delayed Rod Intercept time of 6.5 minutes or greater (which is 90 percent sensitive to the presence of AMD), we schedule the patient to return for another, more in-depth examination plus central fields, OCT, fundus photos and the AdaptDx Extended Test. Then, based on the stability of the patient’s clinical presentation, testing is repeated at follow-up visits to closely monitor disease progression and initiate treatment if necessary.

Hidden Areas of Revenue
As a solo practitioner, the AdaptDx is having a huge impact on my practice, so I can’t even imagine what the effects would be like in a multi-doctor setting. Furthermore, the amazing thing about treating AMD patients is that the more you help them, the more it helps your practice. For example, we’ve always made an effort to dispense sun and blue-blocking lenses as well as supplements, but when patients have a confirmed AMD diagnosis—as is often the case when we perform dark adaptation testing—it prompts me to educate the patient on how we can work together to preserve their vision. In the end, these discussions strengthen patients’ motivation to do everything possible to protect vision, which increases revenue in areas that may not have performed well previously.

New Device, New Possibilities
The new AdaptDx Pro head-mounted dark adaptometer is going to make this testing much more accessible for all practices. This impressive technology removes the need for a dedicated dark room by creating a personal dark room for each patient, in any room, in any light conditions. Plus, there is a built-in artificial intelligence technician named Theia who coaches each patient through the test with adaptive feedback – this will free up my techs to focus on other tasks like entering notes and preparing for the next patient.

I’m excited to see how the AdaptDx Pro guided by Theia will change the future of AMD care and better position optometry as leaders in preserving vision from this chronic, progressive disease.

Craig Bowen, OD, is the owner of Tualatin Eye Associates in Tualatin and the surrounding communities in Oregon.