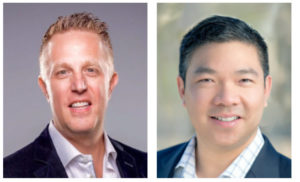 The founders of The Eye Consortium (TEC), Matthew Alpert, OD, and Robert Chu, OD. Drs. Alpert and Chu utilized their broad experience in various roles across the eyecare industry to create the fast-growing alliance group, TEC. This free-to-join group consists of close to 1,200 independent eyecare  and optical practices seeking to differentiate themselves while increasing profitability.

The Eye Consortium (TEC), a new optometric alliance, has launched. TEC offers a new and expanded take on what it means to be part of an alliance, say TEC founders Matthew Alpert, OD, and Robert Chu, OD.

TEC is more than just a doctor’s alliance, Drs. Alpert and Chu note. “It is a philosophy; a high-level strategy that can be incorporated to accelerate any practice in any business environment with a focus on independent practices. We are a large group of independent eyecare professionals who believe in elevating the patient experience and remaining truly independent. There is an understanding among these business-focused ECPs that supporting companies, who are your direct competitors, and utilizing product that have been commoditized, is not a formula for long-term success. It is from this understanding that TEC was formed,” they explain.

Drs. Alpert and Chu say that unlike most other alliances, there is no monetary commitment required for membership. It is entirely free for any eyecare provider to join, however, TEC asks members to consider utilizing its vendor partners, “as it will increase their profitably, but it is absolutely at the discretion of each member.”

Mission: Be Profitable. Be Independent. Be Differentiated.
TEC was founded out of a strong need among eyecare professionals, Drs. Alpert and Chu point out: “ECPs are angry, upset and tired of giving business to companies directly competing for their patients. After years of listening to the voices of independent ECPs, a novel approach was necessary. TEC was formed to fill a void that was not being answered by any of the large, established alliance groups.”

Here are the key tenets of TEC’s mission:

Be Profitable: At The Eye Consortium (TEC), we have curated the industry’s most aggressive programs for the independent practice. We offer the best-in-class suite of solutions to help ease the pain points of running a business. We utilize data and analytics specific to the ECP’s practice and region to ensure maximum profitability.

Be Independent: In our industry today, it has become cliche for groups to talk about their support for the independent while simultaneously lining the pockets of the independent ECP’s biggest competitors. At TEC, we have carefully selected vendor partners who share our core philosophy. Establishing working relationships with these vendor partners will reduce the ECP’s reliance on the vertically integrated companies while keeping them authentically independent.

Be Differentiated: At The Eye Consortium (TEC), we understand the benefit of the premium patient experience. Selling better quality, individualized products within a practice will amplify patient loyalty, elevate the practice and differentiate the ECP from the chain groups and their biggest competitors.

“TEC created an alternative to legacy alliance groups who are owned and supported by the ECP’s direct competitors,” say Drs. Alpert and Chu. They say that, in addition to feeling professionally supported, ECPs who join the alliance will win financially. “Best-in-industry, immediate discounts on products you are already utilizing in your office, as well as opportunities to bring in new products to lower your cost of goods,” are just a few of the benefits TEC members will experience.

Say Drs. Alpert and Chu: “By joining TEC, you will have a more profitable practice, be truly independent and not support companies that are trying to directly compete for your patients. There is no risk and no catch!”